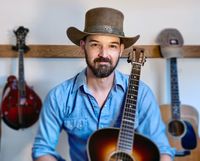 Movin' On Album Release Show with The Craft Brothers

Sheridan native, Doug Andrews, is returning home to the WYO Theater for the official release show of his third independent album entitled, “Movin’ On.” Join Doug and his very special guests, The Craft Brothers, for songs, stories, and more likely than not, unscripted shenanigans.* Get your tickets, tell your friends, and we’ll see you there!

*No, The Three Toos nor Carhartt Brothers will be making an appearance. Unfortunately, we can make no such guarantee about Mama Carhartt for her whereabouts are as of yet unknown. She was last seen headed north for the Mexican border after skipping bail on “unlicensed practice of animal husbandry” charges. Yes, you read that correctly. Mama Carhartt is headed north for Mexico. If sighted, please approach with extreme caution and simply agree with anything she says. Authorities warn she becomes highly volatile whenever contradicted or redirected…. even by a compass.